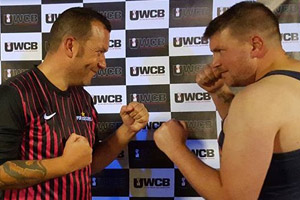 As an experienced machine operative in the Purdie Dished Ends factory, Paul Edmondson is used to working under pressure and with heavy tools at hand.

Now, come this Sunday afternoon, hell be hoping he has all the tools needed in the boxing ring  and that he can handle a different type of pressure - to come through his first every bout, all in the name of raising money for Cancer Research UK.

Paul (pictured right) will be one of 44 people from the city  including both men and women aged from 15 to in their fifties  stepping into the ring for the first time as part of the Ultra White Collar Boxing event at Bradford Citys Valley Parade stadium.

Ultra White Collar Boxing, first established in 2009, provides people with absolutely no boxing background a unique opportunity to experience the sport in a safe and enjoyable environment.

Since its launch, it has raised more than £1.8 million for the charity by holding events across the UK.

Fighters are paired up with opponents of a similar height and weight, and weighing in at 17.6 stones, Paul is set for a heavyweight contest with opponent Steven Webster, who he has sparred with on a number of occasions during the two months of preparation.

Ive never done any boxing before this and I have been looking forward to it, but I must admit the nerves are creeping in now, said Paul, 38, who will be roared on by his wife Katy, his parents, more than 30 other family and friends, and his colleagues from Purdie Dished Ends.

Im quite confident that Ill do well. I only found out who my opponent was going to be this week, and he has looked a good boxer in sparring, so it should be a good contest.

Id describe my style of boxing as aggressive, so Im going to go out all guns blazing and see if it brings me a victory.

Inspired to take part after seeing a long term family friend diagnosed with cancer, but thankfully come through and be given the all-clear, Paul says it is a great event to be involved with.

It is raising money for an excellent cause, so I am sure I can cope with three rounds in the ring, he said.

Ive enjoyed my training, Ive got fitter and Ive lost some weight, so its been positive all round. I just need a win now.

Clive Anderson, managing director of Purdie Dished Ends, has paid for Pauls work colleagues to attend and cheer him on.

Were all looking forward to getting behind Paul and seeing if he can put on a knockout show, he said.

Whatever the result though, we know hell do Purdie proud as it is a brave thing to do, and for a very good cause. And well expect him back in work on Mondayno excuses!

All participants will wear protective head gear and gloves, and coordinator Tom Digby, of Ultra White Collar Boxing, says he is looking forward to another great fundraising event, with a crowd of around 1,000 expected to attend.

The atmosphere in the build-up and on the day itself is always phenomenal as it is run very professionally, with staff and professional training, he said.

Those taking part have been training at Abusins Muay Thai Gym in Bradford and they will all have got to know each very well other over eight weeks.

They are evenly matched depending on their weight and ability, and come fight night this Sunday, this group will have raised about £5,000, which is fantastic.

For more information about the event, or to take part in future events, visit www.ultrawhitecollarboxing.co.uk/sign-up

< Back to News Articles

Have you got a general query or question about a product? Contact Us